Comportment of the Horse

The riding masters of the mid sixteenth century had definite ideas of what was proper for both horse and rider. In general, the Italians looked for an arched neck carriage, the horse’s fact perpendicular to the ground, and the haunches tucked well under the horse, making the forehand light (refer to the woodcut from Fiaschi on the title page of this handout).


Head and neck carriage were considered very important, given how frequently they were discussed in period riding manuals. For example, Astley (1584) says:

“... that all his doings should be upon a steady hand, a just, placed, and settled head, with a pleasant mouth upon the bit, which he (Grisone) accomplished to be a chief point and whole substance of horsemanship.” Astley, p. 42)

Despite the emphasis on the appropriate carriage of the head and neck, the haunches were not neglected. In fact, many of the period airs above the ground require an extremely collected horse who carries much of his weight on his hindquarters, ready to pivot his forequarters one way or another at a moment’s notice. Although this lightness was achieved in part by the bit, there were also several exercises recommended by the Italian masters to assist the horse in achieving collection. For example, when stopping the horse, Corte recommends:

“Likewise when the horse comes to stop, the rider shall greatly help him, by casting his body backwards, which will cause him to stop low behind, even as were upon his buttocks.” (Corte, p. 70)

Fiaschi emphasized that the horse should keep a constant rhythm in all his gaits, so much so that many of his exercises are accompanied by woodcuts with musical notes that define the rhythm of the movement.

“In this second part of the treatise I intend... [to show] … some acts of riders on horseback and their horse tracks and the time in Music of some exercises so that no one can be blamed every time that he performs them if following these instructions.” (Fiaschi, p. 87 trans. Tomassini) 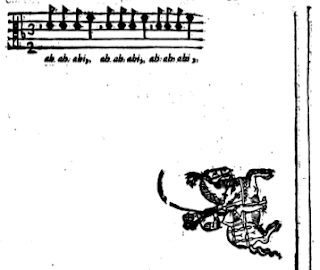 “The meneggio with the measure of a step and a jump, in time to music, with the horse and rider together.” (Fiaschi, p. 105, trans. Jobst)

It is interesting to note that, contrary to most modern sports where it takes years to train the horse to the top levels, the period masters thought that very little time was needed to school a horse to be perfect:

“... it seemeth… four months sufficient to make a horse serviceable and perfect upon the ground… chiefly in Italy, where [the horses] are commonly of great spirit and aptness to be taught.” (Corte, p. 55)

However, most of the masters caution not to push the horse too far, and not to progress from one lesson to the next unless the first lessons can be done flawlessly:

“But let him not gallop, until he be fully perfect upon the trot, and in his speedy trot you must keep your seat and hand firm, so as he may not lose his orderly and comely form before prescribed.” (Astley, p. 50)

“... no horse should be learned to make the Corvette when he is over young, nor till such time as he be perfect in all the lessons aforesaid…” (Corte, p. 46)

Contrary to the modern myth that most airs were trained as battle maneuvers, the period masters specifically cautioned against teaching such airs to a war-horse:

“… if you want to make some pesades, they should not be very high, because, besides that it would be ugly to see a horse who is accustomed  in this way, it would also be detrimental every time that he would behave like this while he’s given encounter, because he could be easily knocked to the ground. This is what I dislike of so many pesades, especially in a war-horse.” (Fiaschi, p. 99, trans. Tomassini)

“But the one who would train a very fast horse, or one particularly suited to war, to these jumps and exercises, would be a fool, because in military operations they would rather produce hindrance and damage instead of any benefit to the Rider, as we have already said before.” (Caracciolo, p. 426, trans. Tomassini)

Instead, the airs above the ground were to be used primarily because they were attractive to onlookers, as we have seen in Grisone’s description of how to ride before a Prince:


“Maybe someone will consider useless and vain that a man toils to teach these jumps to his horse; but he is wrong, because in addition to the fact that a horse that goes swaying from jump to jump it is beautiful to see, certainly, by lightening his arms and legs through these exercises, he becomes more agile and more ready for all the other virtues that are required.”  (Caracciolo, p. 426, trans. Tomassini)